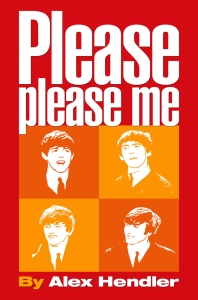 1963 brought the coldest winter to Great Britain since 1740. Much of the Thames froze over from bank to bank, and in some of the villages along the great frozen river it wasn’t unusual to see boys risk falling through the ice for a hearty game of bicycle hockey. Everywhere you went, if you could go anywhere at all, the only conversation to be had was about the weather.

For a young band from Liverpool, the winter of 1963 ushered in their first national tour. As the last act in a package tour, their unusual name – The Beatles – appeared in the smallest type on the bottom of the tour’s promotional poster, underneath such memorable acts as The Red Price Band, the Honeys, Danny Williams, and Helen Shapiro, the sweet, teenaged tour headliner whose deep, powerhouse voice and perfect beehive hairdo had made her a sensation in England. The Beatles were thrilled to be a part of it all. As they traveled around frozen England on the coach with the other acts, playing in ballrooms and cinemas in towns like Doncaster, Wakefield, and Taunton, they couldn’t help but feel optimistic about what the year would bring them.

Over the past three years, while playing in Hamburg, in Liverpool at the Cavern Club, really any place that would have them, whenever their prospects looked the bleakest, John, the de facto leader of the band, would ask in a pseudo-American accent, “Where we going, fellas?”

And George, Paul, Pete, and later, Ringo, would chime in, “To the toppermost, Johnny.”

“And where’s that, fellas?”

“The toppermost of the poppermost.”

And, now, with the release on 11 January of their second single, “Please Please Me,” and a well-timed appearance on the popular TV show, Thank Your Lucky Stars, and another on the equally popular radio program, Saturday Club, “toppermost of the poppermost” seemed well within their reach. “Please Please Me” was climbing the charts, and with their savvy stage show of shaky mop tops, flashy smiles, beautiful harmonies sung into a shared microphone, and, at the end of the four numbers they performed every night, a well-coordinated bow, the Beatles were fast becoming the main attraction of the tour, no matter how small their font size.

John sat next to a dozing Paul, lazily smoking a fag and gazing out the window as the coach rumbled down the motorway towards Sunderland. He was battling a nasty bug he had caught on the tour, and felt pretty worn down and miserable, but as he stared out at the dreary English countryside passing by, streaked in shades of grey by the dull winter light, he felt as sweet as the Zubes throat lozenge he was sucking on between puffs on his ciggy.

All along he knew their time would come, that his time would come. Sure, everyone who has ever played in a band has thought the same thing, but they were different. Compared to the other acts on the coach, to other acts anywhere, he knew they had something the others didn’t. Something new, something fresh. The others were singing that mushy stuff popular in America, and even though they all had hits on the charts they were crap, really – Danny Williams with that achingly horrible cover of “Moon River,” its overblown echo effect droning throughout the song like dogs howling after they’ve ingested some rotten meat; sweet little Helen Shapiro crooning “You Don’t Know,” with those shrill violins squeaking like church mice in the background. Now here was John, that Scouser ruffian from the North, channeling Roy Orbison to write a song about sexual foreplay, with an opening bass and harmonica riff that exploded from transistor radios like a cannon, melting frigid ol’ Britain and waking up bored teenagers just as Bill Haley & His Comets had woken up John, what, eight years ago now.

But John was wise enough to know that their success could vanish as quickly as it had come. How many pop acts in England had topped the charts only to disappear forever? Where were they now? Working in grocery stores in the hinterlands? Mopping up after mules? So when their record producer George Martin rang up their manager Brian Epstein a few weeks back, and insisted he interrupt their tour and bring the boys into the studio for one day to make an LP that capitalized on the success of “Please Please Me,” John knew it was the right thing to do.

After the show that night in Sunderland, their road manager, Neil Aspinall, would pick them up and drive them down to the Smoke. They didn’t even know what songs they’d be recording, but it didn’t matter. John had been waiting for this moment for a long time – they all had – and now that it was here, they were not about to let it slip away.

Read the rest of Please Please Me. Only 99 cents wherever fine e-books are sold.